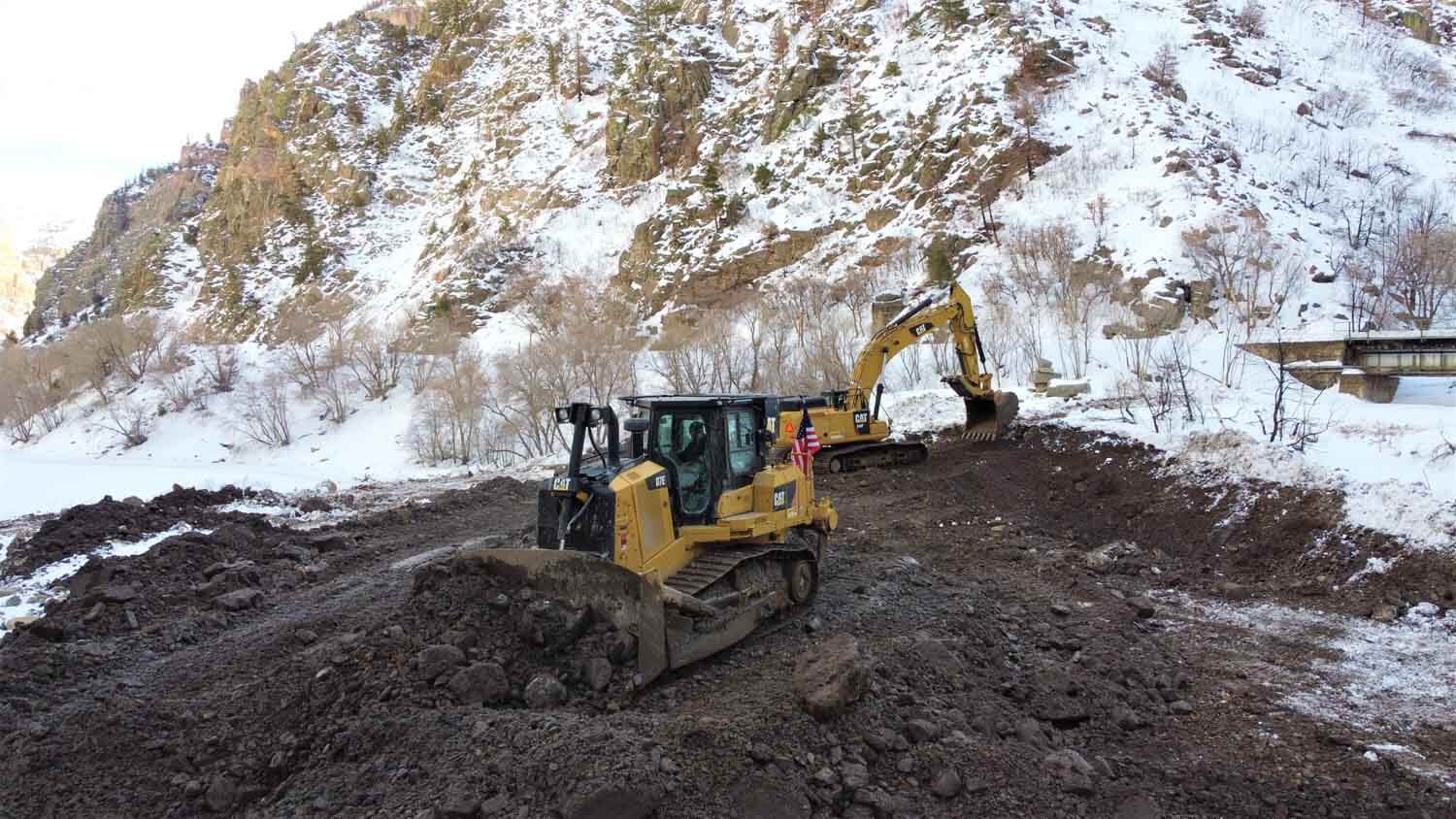 IHC Scott is providing innovative assistance in the extensive Glenwood Canyon recovery efforts on Interstate 70 in Colorado, following a mudslide that took place on July 29, 2021. Twenty-five-plus feet of rocks, mud, and debris were deposited into the Colorado River, putting Interstate 70 at risk of catastrophic damage—all triggered after a rainstorm swept through the depleted and previously fire-ravaged area.

Extensive damage had been done over time to the roads from various other slides in the canyon. So, crews quickly worked to complete repairs during the past six months. However, a large amount of rocks and other debris remain lodged in the Colorado River.

To aid in this portion of the clean-up effort, the Colorado Department of Transportation (CDOT) issued a selective emergency repair contract and chose just two contractors—including IHC Scott—to assist. IHC Scott was selected due to its low bid, reputation, and experience working on a wide variety of CDOT projects.

The goal is to remove 130,000 tons of debris from the river before April 27, in preparation for the start of spring runoffs. Crews will primarily work at two locations along Interstate 70: Unnamed (MP 124) and Devils Hole (MP 124.4); however, discussions are currently underway to add two more areas to the contract.

To ensure the 14-man crew and dozens of trucks meet the deadline, work on the project will ramp up to 22 hours a day until complete. The climate and environment in the canyon are some of the biggest challenges to the project. With average January temperatures hovering around 10 degrees Fahrenheit, brutal winter weather will add to the challenge.

CDOT had initially planned to use a complex ramp system to remove the debris. Because the river resides 28 feet lower than the highway above it, IHC Scott proposed an innovative solution to use in conjunction with the ramp by setting up a conveyer-belt system to expedite the process. The conveyer belt will quickly deposit the debris directly into trucks before being hauled away.

Because of its remote location and difficult terrain, the equipment will be hauled in through the adjacent railway system. Offloading the equipment to the side of the embankment and safely down into the riverbank area will be another monumental challenge of this project.

IHC Scott won’t just remove the rocks and debris from the river. Plans are being made to recycle the rocks by processing them into aggregate products. Later, that aggregate will be used on other IHC Scott highway paving and construction projects in the area.

Glenwood Canyon in Interstate 70 will soon return to a new and improved version of itself following the road repairs and the river restoration efforts of IHC Scott and others.

IHC Scott will always be prepared to take on any challenging project in unique geographic locations. IHC Scott’s reputation for quality work, a smooth process from proposal to execution, and a proactive team has earned itself a reputation for excellence that can’t be beat.