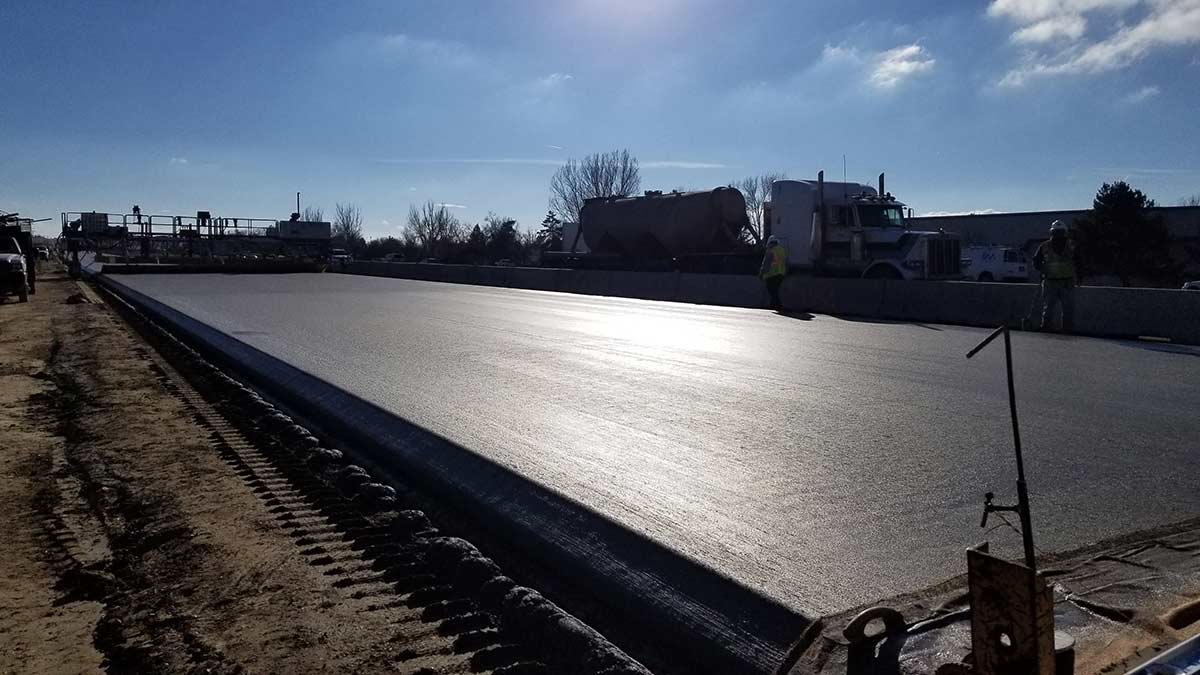 CDOT partners with Kraemer and IHC Scott for I-25 improvements to create safer, easier travel

Colorado is one of the fastest growing states in the nation. From 2010 to 2020 the population of the state increased by 14.8% and by 2040 the population is expected to increase to 7.8 million people (a 47% increase) and 5 million jobs (a 51% increase). With this growth comes an increase in traffic congestion, wear and tear on ageing roadways, safety issues, and impacts to citizen mobility.
According to a report titled “Keeping Colorado Mobile” produced by TRIP, a national transportation research nonprofit:

One of the ways CDOT is addressing this challenge is to expand a 14 mile stretch of I-25 between Johnstown and Fort Collins. The project was awarded as a 5-year joint venture design-build between Kraemer North America (Kraemer) and IHC Scott.

The project will add tolled express lanes in both the northbound and southbound directions and reconstruct existing pavements. Adding lanes to this busy freeway will address some of the congestion that hampers the state’s ability to support economic development and quality of life. Heavy traffic robs commuters of time and money and imposes increased costs on businesses, shippers, and manufacturers, costs which are largely passed on to consumers. To accommodate the required widening, the joint venture will reconstruct 19 bridges and add two more. It will also reconstruct five large box culverts under I-25. The scope of the project will involve moving over 2 million cubic yards of dirt, placing over 1 million square yards of base and concrete, completing numerous irrigation and utility relocations, implementing water retention and control measures,
constructing approximately 215,000 square feet of various walls, installing approximately 9-miles of storm drainage, and installing a completely new roadway lighting and safety package. In addition to widening the freeway, the project will address several safety issues throughout the corridor. The current corridor has substandard shoulders as well as other aspects of the roadway that aren’t up to current safety standards. This area of I-25 has been modified throughout the years to some extent but there is some older infrastructure –older bridges and roadways – that need to be addressed.

The Northern Colorado region has three major flood plains: The Big Thompson, the Cache la Poudre River Basin, and the Box Elder. In 2013, massive flooding in these areas caused the closing of many roads, including I-25 when waters from the Big Thomson river over topped the freeway, shutting it down. One of the major benefits of the expansion project is that it takes two sections of I-25 out of the hundred-year flood plain, improving safety and reducing the risk of
flooding in the future.

To increase transportation options for travelers, the project will provide a state-of-the-art intelligent transportation and tolling system. This will include constructing a center load bus rapid transit (BRT) system, the first of its kind in Colorado. The center load station will be located between the two directions of I-25. Pedestrians will access the BRT from underneath the roadway through a box culvert and then walk up to a modern platform that will provide interactive monitors displaying travel times and other important information. To further support travelers, an additional park and ride location will be constructed.

Negotiations for the added scope to incorporate the ultimate alignment were completed in the summer of 2020 and construction got back on track. The project is now scheduled to be completed in 2024 and includes 14-miles of express lane and roadway reconstruction, three bridge replacements, one center mobility hub, three interchanges, three railroad bridge replacements, right of way preservation for the median, and zero design exceptions.

As partners on this joint venture project, Kraemer and IHC Scott have been able to manage the project schedule and keep challenges to a minimum through their use of the design-build delivery method. In a typical design-bid-build contract, the job is designed in its entirety before any work begins. With design-build, Kraemer and IHC Scott leveraged a design and construction team to deliver portions of the project design — portions of the project that can start construction — while the remainder of the project is being finalized. In doing so, they compressed the overall project schedule by running the design and construction concurrently. This method has shaved almost three years off the planned completion date. “The delivery method of design-build is a huge benefit to the region and the project,” says Nathan Corbin, project director for Kraemer. “It allows us to complete the work on a far more aggressive schedule than under a normal procurement method.”
In addition to reducing time on the project, design-build improves adherence to FHWA safety criteria. Sometimes the design of a road way is such that it requires an exception to those criteria — called a variance — that must be approved. Because it allows for more flexibility and innovation during both design and construction, the design-build method has allowed them to eliminate all existing variances, increasing the safety of the roadway.

Beyond the obvious benefits of better roads, improved safety and more transportation options, the I-25 expansion project offers nearby communities some additional gains. With a job this size — almost half a billion dollars — a tremendous amount of that money is being pumped into the local economy through hiring local workers, purchasing materials, and contracting with local businesses and suppliers. To date, the project has utilized:

Gains will continue after the project is completed. One of the goals of the project is to encourage the expansion of commerce into northern Colorado and facilitate the expansion that is already underway. “This project will definitely bring more industry, more expansion and more growth into the region,” says Greg Frazee, area manager with IHC Scott. “As an artery to metro Denver and beyond, an expanded I-25 will bring more opportunities to all the local communities in this area.”