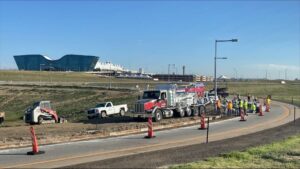 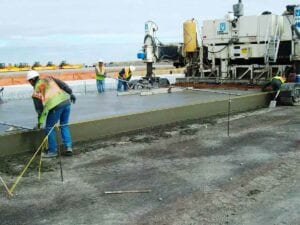 Denver International Airport’s Concourse C RON Project included 20,862 Square Yards of 8″ Roller Compacted Concrete for the pavement areas adjacent to the concourse aprons, where snow removal efforts stockpile excess snow during heavy snow events. The Owner required the heavy-duty serviceability of concrete pavement but had budget constraints. IHC recommended the use of Roller Compacted Concrete (RCC) to meet the Owner’s needs and financial goals. The Owner chose the RCC alternative because it brought all of the characteristics of concrete pavement at a price cheaper than a Portland Cement Concrete (PCC) alternative. DIA had never specified an RCC alternative pavement in any of its previous applications, so IHC, with support from the Portland Cement Association, and the Rocky Mountain Cement Shippers Council, drafted and presented appropriate RCC specifications for the project. The engineering firm of DMJM Harris reviewed and collaborated in the development of the specifications ultimately used for the project.

​The 8″ RCC pavement was placed on top of 6″ of recycled concrete pavement base, utilizing on-site waste concrete as an environmentally friendly alternative to virgin base materials. While RCC pavements generally do not require sawed joints like PCC pavements for long-term performance and serviceability, the Owner required pavement joints to be cut and sealed on a 30′ x 30′ joint pattern. The relief sawing was accomplished with a Sofcut saw, allowing the relief cutting to be performed immediately upon final surface roll, with widening and sealing performed with silicone sealant.

​RCC in this application provided a very serviceable concrete pavement at significant cost savings to the customer. While the surface characteristics vary slightly in appearance and aesthetics from that of concrete pavement, RCC can prove a very cost-effective alternative to either concrete or asphalt pavements for industrial applications. The RCC pavement application provided the Owner with a pavement that can stand up to heavy snow plowing and heavy truck traffic during snow events, resistance to turning and rutting common with asphalt pavements, with the added advantage of not deteriorating under melting conditions where large stockpiles of snow are present. 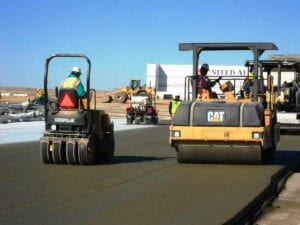 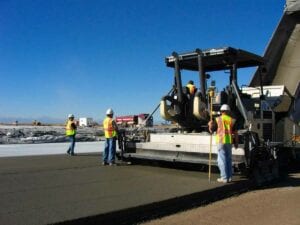 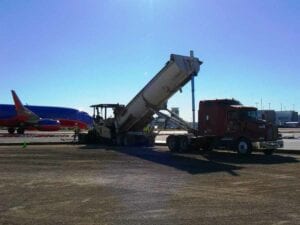